During a recent stay for a conference, I discovered elegance in downtown Los Angeles hospitality. While the Millennium Biltmore Los Angeles, located across from Pershing Square, is not a full four-star experience, the 95-year-old hotel holds to high standards. 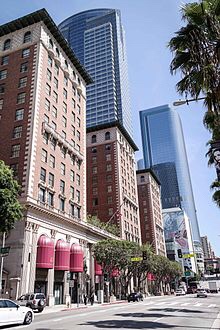 This is not a showy, pretentious property. Despite its grand reputation, history and lavish decor, the Millennium Biltmore primarily distinguishes itself as a premium hotel based upon its outstanding service. The standard room is adequate to good, depending upon one’s modern demands. Mine was alright, though I had to ask for another room upon check-in because the hotel’s non-smoking policy had clearly been violated by the previous guest. The fifth floor room lacked a vanity mirror for proper grooming, space was tight and housekeeping was mediocre.

Yet convenience, uniqueness and exemplary service compensate for the Millennium Biltmore’s flaws. Staff were without exception responsive and attentive during the conference, often exceeding expectations and anticipating demands. For example, when conference staff were overwhelmed during setup for registration, Biltmore staff, who were watching like sentinels in the background, stepped in time and again to provide logistical support, sustenance and manpower.

Cecil B. DeMille filmed his 1924 silent film Triumph here. Past guests include Howard Hughes, Eleanor Roosevelt, Jean Paul Getty, Shirley Temple, the prince of Wales, Walt Disney and Rudolph Valentino. Gary Cooper (High Noon), Claudette Colbert (The Palm Beach Story) and Clark Gable (Gone With the Wind) won Oscars here. The Biltmore proudly served American soldiers during World War 2. The bookie room in The Sting (1973) was filmed in the Biltmore’s Gold Room. The same room was used during Prohibition as a speakeasy with a hidden door so guests could dodge police by escaping onto Olive Street (for now, the exit is sealed in brick). Indulge in the hotel’s history with the concierge, who’s very knowledegable and is equipped with a complete list of motion pictures and television shows filmed here. Taylor Swift recently shot a video here when she stayed overnight. A web series was filming during my visit. Also stroll what the Biltmore calls its historic corridor, which features an exhibit of the hotel’s pictorial history.

Discovering the Millennium Biltmore means immersing in its small marvels and charms, chiefly a sense of simple luxury in the madness of downtown LA. Its bar and Cognac Room are both intimate and elegant. Smeraldi’s, where I dined for breakfast and lunch, serves delicious food very fast. Even the lobby, pictured above, fosters a quiet and relaxed atmosphere. Fitness, swimming and sauna and steam rooms add value and the Rendezvous Court with its piano, trickling water and natural light, as well as an afternoon tea, is perfect for reading, writing and thinking or conversation.

That the hotel’s interior designer, Giovanni Smeraldi, also decorated the White House and the Vatican is not surprising. From motifs based on literature’s Tales of the Arabian Nights to angels, gods and myths and 24-karat gold, the Millennium Biltmore surrounds the guest in elegance, interesting accents and themes and space for a distinctive and memorable downtown Los Angeles experience.