University Professor Distorts My Writing in Her New Book

Years ago, I wrote movie reviews for a website in which I was a partner, editor and writer, which I later sold to an Amazon.com subsidiary. One of them was a review of director Roland Emmerich’s environmentalist movie, The Day After Tomorrow, which I did not praise, let alone recommend. I titled the 2004 article, which was published prior to the film’s debut, “Ecozilla”. The article’s no longer available. Like much of my writing, it’s not included on my site’s archives. 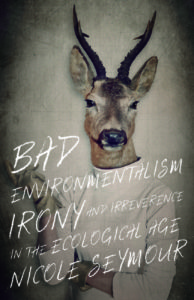 An English professor in California found and read the review; she cites it in her book, Bad Environmentalism: Irony and Irreverence in the Ecological Age (University of Minnesota Press, 2018).

Yet the author Nicole Seymour, the associate professor at California State University, Fullerton, who also authored a book titled Strange Natures: Futurity, Empathy, and the Queer Ecological Imagination, falsely describes me in her book as a “conservative”. The author made no attempt to reach out to me in advance of publication, let alone attempt to confirm her assertion as fact. I do not claim to be and have never described myself as a conservative writer, journalist or thinker. In fact, most of what I’ve written about conservatives, including my commentary for newspapers such as the Arizona Republic, San Francisco Chronicle and Los Angeles Daily News and my blog post “Conservatives and the Tea Party”, which is publicly available, disavows conservatives.

Additionally, on the movie website the author references, most of my writing, including reviews, columns and other articles, explicitly criticizes conservatives, including President George W. Bush. My review of one of the religious movies released by Disney, and another article criticizing fundamentalist Catholic Mel Gibson, received some of the most threatening reader feedback of my career, including death threats.

[a] conservative review of the 2004 climate change-themed blockbuster The Day After Tomorrow echoes liberal Jones, though much more sourly: “Prepare for more religious propaganda: [The Day After Tomorrow] is the New Left’s doomsday evangelism with ecology as its religion“ (Holleran 2004). A political conservative complaining about “religious propaganda” is, of course, an irony in itself though one a bit beyond the scope of this chapter.”

This distorts the truth, adding a deeper distortion by implying that this writer is also religious; indeed, it’s clear that the Cal State Fullerton scholar holds that every conservative is inherently religious (is Seymour unaware that one can be both secular and conservative, as one, such as Hillary Clinton or Pete Buttigieg, can be both religious and liberal?) Again, the author made no attempt to reach out to me in advance, during or after publication. The author simply prejudged me as a “political conservative” and as a religious conservative at that based on a negative review of an environmentalist movie. The California State University professor’s dishonesty provides an important example of an academic jumping to conclusions, not going by facts, not even attempting to go by facts, and distorting the truth with abandon.

As usual, and as is increasingly necessary, particularly with regard to claims by those promoting environmentalism, the reader should doubt and scrutinize what he reads. This is because, to paraphrase a terrific line, what you read ain’t necessarily so.