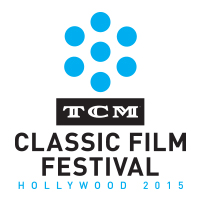 My own festival track record is extremely limited. When I covered movies on assignment, I avoided film festivals. I remain dubious of the premise of each festival. Many seem to exist to circumvent a creative and distributive process that ought to work well in the motion picture industry. Or they exist for self-aggrandizement or worse, such as meaningless awards based on anything but merit or segregation according to race, sex or sexual orientation, which I think is a rotten idea. I think film festivals are fine if they’re based on a legitimate idea, such as recognition of an artist, genre or theme, such as Buster Keaton, silent film or history depicted in comedy. This is why I accepted an invitation to host the centenary series of John Wayne movies during an Orange County, California, festival in 2007.

This is also why I decided to attend TCM’s festival this year. Classic movies are certainly a legitimate topic for study and celebration. I’m glad I attended and I plan to post more extensive coverage in the coming days, including new reviews of films coming up on TCM (‘Like’ my Facebook page for regularly posted mini-reviews of films on TCM’s lineup). Among the movies: Too Late for Tears (1949) with Lizabeth Scott, Gunga Din (1939), Malcolm X (1992), Viva Zapata! (1952), So Dear to My Heart (1949) and The Sound of Music (1965). This last picture celebrates its 50th anniversary, which afforded the festival an opportunity to invite its surviving principals to a special showing at Grauman’s (now TCL) Chinese Theater on Hollywood Boulevard, where co-star Christopher Plummer (The Man Who Would Be King, Malcolm X) pressed his hands into the Chinese’s famous forecourt.

In fact, the 50th anniversary screening was presented as the festival’s opening night gala, though new media was not permitted to attend the screening or the gala and the film’s stars, Julie Andrews and Christopher Plummer, were not available for interview. They were there, looking good and doing scads of snippets and shots for television, and they were joined by others in attendance, including TCM host Ben Mankiewicz.

The festival’s theme was History According to Hollywood. From films about Mexican revolutionaries and Islamic radicals to the musical about a family fleeing the Nazis, the theme played well with TCM’s Mankiewicz, Leonard Maltin and others filling in for the ailing Robert Osborne throughout the festival. The site of the first Academy Awards® ceremony is the festival’s official hotel, the Hollywood Roosevelt Hotel, and venues include Grauman’s Chinese Theatre, Grauman’s Egyptian Theatre and other Hollywood Boulevard and nearby picture houses.

21-year-old Turner Classic Movies (TCM), part of Turner Broadcasting System, a Time Warner company, presents great films uncut and commercial-free from one of the world’s largest film libraries. TCM features commentary and insights by Mankiewicz and Mr. Osborne, interviews, documentaries, series such as The Essentials, annual programming such as 31 Days of Oscar®, this annual festival and the TCM Classic Cruise, as well as the TCM Classic Film Tour in New York City and Los Angeles (review of the LA tour to come). TCM also produces books and DVDs and a databsae at tcm.com and through the Watch TCM mobile app.

Festival logistics pose a challenge because there’s so much to do and it’s held in a congested area. Between government road closures, which are common and sudden and can add 30 minutes to a pedestrian transport, and criminals and religious fanatics (Korean women screaming ‘please don’t go to hell!’ in broken English are an especially warm welcome), guests may feel lucky to make it from the Roosevelt to the Egyptian without being run over or assaulted. The dodgy area is policed by police officers that hide in shadowy corners chatting and generally not actively, visibly policing and that’s when they’re on patrol. One guest Tweeted that Loews overbooked and gave away her room, which she said she’d reserved in December, and she had no place to stay. Other gripes include overcrowding, spiked prices (packages went up this year, topping at $1,800) and a general sense that the quality of programming and organizing is not as high. People were peeved that TCM didn’t announce that Robert Osborne, the fountainhead of TCM, would not be attending as advertised until days before the commencement. Among media, consensus is that the red carpet was a bust.

The movies and guests comprise the whole value of the experience. These and a waiter at the Roosevelt named Ted who in one evening of exceptional service at the makeshift Club TCM (where the Oscars were first held) exhibited better branding and relationship building skills than everyone else in the 4-day conference combined. Guest demographics, and TCM’s viewers are the most passionate, knowledgeable, informed and intelligent moviegoers on earth, are overwhelmingly older and white, though not entirely, with the American middle class and upper middle class well represented. I met married couples from Long Beach, Atlanta and New York City, bloggers from Scotland, filmmakers and movie geeks from Hollywood and Asia and bright executives from TCM, the studios and movie industry centers around the world. It’s an amazing, whip-smart group of people. For instance, I talked with three young men from New York at the closing party whose favorite film was Steamboat Bill, Jr. (1928) starring Buster Keaton, which was accompanied by a live orchestra. These guys knew everything about the movie and its cast, history and availability. In my experience, the guests are better informed and more knowledgeable about movies than those asking questions.

My favorite part of the festival is watching movies with politically incorrect audiences and then speaking freely about the films, ideas and themes afterwards. It is refreshing and recharging. Everyone has a different perspective. Everyone has favorites. Everyone has constructive criticism of the festival, the industry, Hollywood and its environs. In other words, they’re freethinkers driven by values and a sense that the best in life is achievable, realizable and worth fighting for—and that the ideal can and ought to be projected in movies, then thought, written and spoken about with seriousness of purpose.

This is the best aspect of TCM’s Classic Film Festival; that movies once made should be seen, uncut and considered, discussed and, in a certain sense, revered. Reverence for classic movies, in keeping with the channel’s and company’s founder Ted Turner’s original vision, is what Turner Classic Movies does best. It’s what drives the channel, its products, growth and progress and its host and audience. It’s what keeps me watching TCM and wanting to see and talk about movies with those who do, too. Let others say “it’s only a movie”. TCM’s Classic Film Festival is for those who know better.