This spring, two annual festivals caught my attention. The Los Angeles Times Festival of Books at University of Southern California (USC) is always interesting for its literary lectures, panels and appearances. I usually learn about new stories, books and publishing deals, trade trends and developments and run into someone I know or want to know and this year was no exception. I learned about everything from new literary journals and adapting Greek plays to new small publishers, printers for self-published books and blogs, resources and programs for writers. 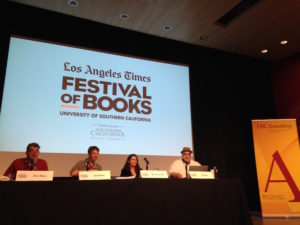 The Festival of Books panels, in particular, can get pretentious as writers and editors share their thoughts from the ivory tower and some of the comments reinforce that today’s dominant intellectuals are disconnected—some knowingly—from audiences and reality. For instance, a dramatic arts dean at the university, a published author, admitted that he hadn’t read the play he was adapting. He added that he’d read it once decades ago but seemed oddly proud of his not having studied and mastered his topic, as if this was the point of adaptation; to evade the cause of the work. Others rambled and most speakers at the panel discussions talked as if everyone was familiar with every term, work and literary reference, though moderators tried to keep them grounded in communicating with a wide, general audience.

Listening to writers talk about writing makes me think about better habits, tools and techniques and the event offers an opportunity to meet other writers, editors and publishers. For some of my contracted projects, it’s especially helpful to know about new producers in the market at any point in the writing-to-publishing process. So, overall, I’m glad I went.

Turner Classic Movies hosts a classic movie festival in Hollywood every year, which I attended for the first time in 2015 and again this spring (read my roundup of 2015’s event here and a preview of 2016’s festival here). The panels are, perhaps not surprisingly, less pretentious than the book festival’s, though I found myself wanting more of the exchanges than some of the brief interviews and panels delivered, though Faye Dunaway’s interview was extensive and the star of Network, The Towering Inferno and The Thomas Crown Affair was thoughtful and gracious (more on this later). 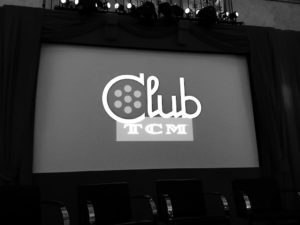 A panel discussion on journalism and movies with writers, editors and a producer, which I wrote about for LA Screenwriter (read my report here), could have lasted another 45 minutes and I would have stayed. TCM’s panel, which was moderated by TCM host Ben Mankiewicz, a TV journalist earlier in his career, included writer/director James Vanderbilt (Truth), Oscar-winning writer Josh Singer (Spotlight), broadcast news producer and author Mary Mapes (portrayed in Truth by Cate Blanchett) and journalist/editor Ben Bradlee, Jr., portrayed by John Slattery in Spotlight—Bradlee was partly responsible for managing the Boston Globe’s Pulitzer Prize-winning coverage of the Catholic Church sexual abuse scandal, the subject of Spotlight, which won 2015’s Oscar for Best Picture.

This year, I was able to see at least one past Best Picture Oscar winner on the big screen as with last year’s screened classic movies—Too Late for Tears (1949) with Lizabeth Scott, Gunga Din (1939), Malcolm X (1992), Viva Zapata! (1952), So Dear to My Heart (1949) and The Sound of Music (1965)—and this one, Sylvester Stallone’s 1976 hit Rocky, was a film I had never seen in any format. Read the reviews, which include notes on accompanying festival interviews where applicable, either on The New Romanticist or here on the blog as available. So far, besides Rocky, I’ve reviewed Stanley Kramer’s Guess Who’s Coming to Dinner (1967) with Sidney Poitier, Katharine Hepburn and Spencer Tracy, John Singleton’s Boyz N The Hood (1991) with Cuba Gooding, Jr., Angela Bassett and Laurence Fishburne, Josef von Sternberg’s Shanghai Express (1932) with Marlene Dietrich and Elia Kazan’s A Tree Grows in Brooklyn (1945) with Dorothy Maguire. I’ve added a review of The Virginian (1946) starring Joel McCrea, which recently screened at the Autry Museum of Western Heritage, too, and there are a few more reviews to come (of The Manchurian Candidate (1962), The Band Wagon (1953) and I’ve Always Loved You (1946).

Additionally, I plan to post a roundup of 2016’s TCM Classic Film Festival, themed this time to “Moving Pictures”, including coverage of other lectures, interviews and related news, such as TCM’s new fan club, Backlot, and its new streaming partnership with the Criterion Collection. ‘Like’ my Facebook page for regularly posted mini-reviews of films on TCM’s lineup.

For live instruction, evaluation and discussion of movies, books and media, and studious breakdown of the writing process, feel free to attend my classes if you’re in Los Angeles this summer. Space is limited for updated courses on social media (read more and register here) and Writing Boot Camp (read more and register here) in Burbank. If you want help with a project and you’re unable to attend, let me know (I can probably help by phone, FaceTime or Skype). Otherwise, read the monthly newsletter for tips, tools and thoughts. Look for new reviews, articles and stories to come.