A movie about exceptionalism overcoming racism at an agency of the government, an effort to restore a building and a forthcoming book about accounting for an entire arts genre give me fuel this winter.

America’s top movie at the box office is Hidden Figures, which centers upon three individuals of ability in the Jim Crow-era South, when racist laws infected even an aeronautics U.S. agency charged with launching an American into outer space. It’s a wonderful film, really, which doesn’t surprise me because it’s written and directed by the same individual who wrote and directed 2014’s St. Vincent, which is also very good. His name is Theodore Melfi and he recently talked with me about writing and directing the talented cast, which includes Empire‘s Cookie, Taraji P. Henson, his thoughts on racism, storytelling and what he’d do differently and having his movie screened at the White House. Read my exclusive interview with Melfi about the nation’s number one motion picture here.

Speaking of exclusive interviews, I’ve recently had the pleasure of interviewing architect Dion Neutra at his home and office designed by his father, the late modern architect Richard Neutra, whose legacy I explore in an article about a campaign to restore one of Neutra’s signature buildings (read the story on LATimes.com here). I’ve been covering this effort by an architect and a realtor who say they want to restore the Los Angeles clubhouse to its original splendor, and finally met and interviewed them at Neutra’s building for a detailed restoration tour. The building, a parks and recreational center in northeast Los Angeles, opened in the 1950s with a stage that plays to both interior and exterior audiences, a kitchen with a window for selling concessions, an athletic court, reflecting pool and sloping landscapes—all in glass, brick and Neutra’s favored metal, steel—with a director’s office overlooking gymnastics, trails, pine trees, playgrounds, tennis courts and with retractable walls to let the air and spectators or audiences inside. The two gents are in talks with Dion Neutra as I write this. 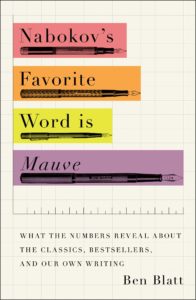 A forthcoming book features new and interesting data about the words and works by William Faulkner, Sinclair Lewis, Stephen King, Agatha Christie and Ayn Rand among other literary greats. It’s titled Nabokov’s Favorite Word is Mauve (Simon & Schuster, March 14, 2017) and the author covers detailed statistical analyses of these and other writers in a solid narrative. Among the newly mined data are authors’ ‘favorite’ words, how sexes write differently—Rand rates as “masculine”—and use of adverbs, exclamation points and novels’ opening lines. Mine is the book’s first non-trade review. Read my article here.

The newest Writing Boot Camp starts up next month (seats are still left in the 10-week course, so register here), moving to Tuesday nights, the day after my all-new course on social media (register here). These courses evolved from career camp workshops I was asked to teach several years ago. I subsequently taught a series of nine media and production workshops for Mood U, online, economic development, expo and public library presentations and developed the writing and media classes into full courses a few years ago for adult education in LA. They’re works in progress yet past students give positive and constructive feedback, so I’ve created Facebook groups for past students. Stand by for details and more on the upcoming courses.

Meanwhile, thank you for your readership, support and trade. I read every piece of correspondence, though I’m sometimes slow to respond, sent through the site and social media. This year, I plan to remake my website and I am working on other projects, from stories in manuscripts and screenplays to my cultural fellowship, new partnerships and a new media enterprise. For now, I want you to read, share and gain value from these articles about inspecting works of art and making, or mining, something good.