I never know who’s going to sign up for my communications courses.

Last semester, I was pleasantly surprised when one of my former Los Angeles Times colleagues, an award-winning photojournalist, enrolled in my course on social media.

“I want to let you know that I’ve enjoyed the class tremendously, and I sure learned a lot…,” the student wrote to me after the course finished. “Thanks a million!” The pleasure was mine. In her case, connecting, re-connecting and deepening familial relations was a major goal for studying how to advance her grasp and mastery of social media. Others seek fulfillment of goals to make money, start a business or switch to a new career. 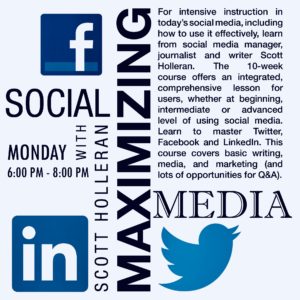 Helping each student reach a goal is its own reward.

Besides professional social media managers, screenwriters and entertainment industry executives, I’ve had doctors, engineers and lawyers enroll in the course, which now includes membership in my alumni network. We gather with my Writing Boot Camp students and alumni from time to time for social meeting, mixing and networking.

Young and old adults alike enroll in classes, which often include Hollywood cast, crew and, sometimes, those considered by some to be screen legends, including an Oscar-winning makeup artist and the actress who served as model for the animated character Tinkerbell in Walt Disney’s 1953 classic Peter Pan. This year marks five years since I created the course, which I made to show why one’s self-interest drives successful social media. 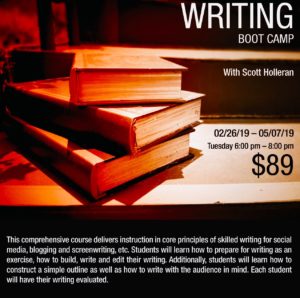 The social media courses run during a few months in wifi-ready classrooms on a campus near Bob Hope Airport. I coach writing, editing and marketing to students at Burbank Adult School, providing step-by-step instruction with my Writing Boot Camp, also in its fifth academic year.

My writing course features in-depth study of literary works, including poems, short stories and essays by Darwin, Rand, Kipling, Angelou and Bradbury and, of course, detailed analysis and feedback on student writing.