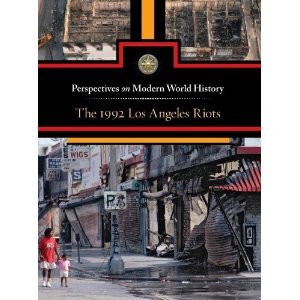 According to the publisher, each volume in the series opens with background information — including primary source material — covering periods leading up to, during and after the event. Then, each volume offers an in-depth perspective on the controversies surrounding the event and the current implications or long-lasting effects. Each volume concludes with first-person narratives from people who lived through or were directly impacted by the event. Cengage says that essays are compiled from a variety of sources and included to provide context for readers unfamiliar with the historical event. I worked with Cengage and approved the reprinted essay and pull quotes. My thesis is that the riots were fundamentally caused by President George H.W. Bush. A slightly longer version of the essay, which included a personal account of how I escaped an attack by rioters, was posted on my Web site. Cengage says that Perspectives on Modern World History exists to foster critical thinking skills, support student debate assignments, increase global awareness and enhance understanding.

Features of each volume include annotated table of contents, introduction to the topic, a world map, three chapters that contain essays focusing on general background information, multinational perspectives and first-person narratives, full-color photographs, charts, maps and other illustrations, sidebars highlighting related topics, a glossary of key terms, chronology, bibliography of books, periodicals and Web sites and an index. I wrote the essay in conjunction with the riots’ 20th anniversary.