With a festival theme of classic movies originating with literature, Turner Classic Movies’ 2018 TCM Classic Film Festival in Hollywood satiated, enticed and, on occasion, stirred in audiences the power and wonder that the original filmmakers intended decades ago. 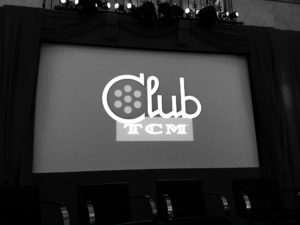 Event planning in one of the city’s seediest neighborhoods is a challenge. In today’s cultural void, creating a sense of purpose, let alone eliciting an emotional response, around a particular idea is an impressive achievement. That Turner Classic Movies attempts, executes and sustains this festival every year, especially soon after losing its defining host and ambassador, Robert Osborne, and that brand TCM does this in Hollywood, which increasingly resembles a horror film set, astounds.

Senior programmer Charlie Tabesh, as Robert Osborne told me more than once while persuading me to attend the festival, has mastered the metrics of showcasing classic movies. TCM’s theme this year, films based upon a piece of writing, has renewed meaning and relevance. As I told them both, programmers Stephanie Thames and Scott McGee assembled an outstanding program.

New tours and venues, courtesy of the American Society of Cinematographers and the Academy of Motion Picture Arts & Sciences, were on the bill. Grand Prix (1966) screened in the ArcLight Hollywood’s Cinerama Dome. Interviews with movie makers James Ivory, Gillian Armstrong and Robert Benton added value to the festival. So did the presentation of the first Robert Osborne Award, which went to Martin Scorsese at Grauman’s Chinese Theater. Other welcome additions include a tear-out schedule in the program guide. Familiar guest speakers and moderators, such as Cari Beauchamp, Ben Burtt, Leonard Maltin, Wyatt McCrea and Donald Bogle returned for stimulating, thoughtful commentary, perspective and insights.

TCM occasionally does get in its own way. I watched A Woman Rebels (1936), a compelling movie starring Katharine Hepburn, on TCM after the festival and learned of its literary origins. This made me wonder what classic movie scholar and author Cari Beauchamp would have to say about it and wish the movie had also been featured. The event lacks wider and deeper philosophical perspectives (as I pointed out in my preview) and this year’s festival is no exception. In retrospect, TCM missed key literary-based pictures, though there may be good reasons, including rights, quality and recent festival screenings.

Other gripes or suggested steps in progress include better red carpet positioning — having movie stars, especially those in their nineties, posing in LA’s late afternoon sun is brutal — handling and presentation of talent. A stellar event such as this requires hands-on attention to detail. It was disappointing that few among the press pool knew that Sounder‘s Cicely Tyson, for instance, had portrayed both Marva Collins and Kunta Kinte’s mother on ABC’s epic Roots.

Speaking of Miss Tyson, whose tale of being tossed out by her mother as a kid for wanting to be an actress is wrenching, the interview with TCM’s host Ben Mankiewicz before Martin Ritt’s Sounder contained one question about the 1972 movie. Sounder co-starred the late Paul Winfield and introduced Kevin Hooks in his film debut. An actress of Miss Tyson’s caliber calls for delving deeper into the movie the audience is about to see.

Speaking of longtime host Ben Mankiewicz, he visibly makes every effort to be his best. Ben treats every festival gathering to his sense of humor. However, segments such as the “Growing Up Mankiewicz” feature, which packed a standing room only audience into Hollywood Roosevelt’s Club TCM, take time from festival programming for and about classic movies qua classic movies.

Indeed, TCM thrives on worshipping movies as movies, down to cinematography, storyboarding, lighting, casting, marketing and that which makes it all possible, the screenwriting. An emphasis on facts, analysis and context for classic movies ought to trump having a blood relation to those who made them. I enjoy witty and knowledgeable commentary by hosts such as Illeana Douglas, for instance, but it’s primarily because she demonstrates enthusiasm for the movies. Part of what makes Robert Osborne an enduring figure in TCM’s legacy is his experience and mastery of movies as a performer, columnist and, ultimately, as a television interviewer and host.

Robert Osborne’s proximity and connection to movie stars and filmmakers informed his insight, wisdom and passion for movies but knowing that he knew Lucille Ball and Olivia De Havilland was not fundamental to appreciating TCM’s brand; it was co-incidental, icing on the cake. What sealed his viewer relationship was his apparent and abundant love for classic movies and, crucially, his accessibility to the audience in sharing what he loved. He always sought to ground his experience in being the boy from Colfax, Washington, who’d immersed himself in the movies. That he later made a living from it was a happy fact which he cherished. He wanted you to cherish it, too.

Robert Osborne’s reverence for movies was the byproduct of, not an afterthought to, his experience and knowledge. He always sought to forge a connection with the audience rather than magnify any other connection he might have had. In every case, he always brought the focus back to classic movies.

Classic movies this year were, as always and in general, superb. Sounder moved me to appreciate rational parenting from the perspective of a poor, black family during the Great Depression. Places in the Heart had a similar impact, though about a family made by choice, not simply by blood. Alfred Hitchcock’s Spellbound was something of a marvel in nitrate at Sid Grauman’s Egyptian Theater. I Take This Woman (1931) allowed me to experience the chemistry of young Gary Cooper and Carole Lombard. Kramer vs. Kramer, written and directed by Robert Benton, whom I had the pleasure to meet and interview during the festival, reminds me that life’s smallest moments, recreated with deliberation, can pack the most attuned emotional wallop.

The single movie that made the most searing impression is William Wellman’s A Star is Born (1937). This film, like 2016’s best movie, La La Land, revels in its screenwriting. The motion picture spins a tantalizing story of abiding romantic love, intoxicating glamour and the unspeakable agony of losing one’s highest value. Like that recent film, and like Hollywood and everything decent, honorable and larger than life about it, particularly as a microcosm for the best of America, this less jaded, more wholesome version of A Star is Born is cautionary, resplendent and redemptive.

The often remade movie ultimately depicts ambition. Wanting more of work one loves is not enough, this classic movie suggests, to fuel one’s life, let alone to let one live large. Whether this desire to create destroys or inspires the one wanting goes to whose sake for which one wants and whether the want is deserved. This makes all the difference.

As cinematic drama, so does A Star is Born, yesteryear, now and, with luck, always. The intelligent movie radiates a kind of glow born of combing through the details of hardship, strength and the relentless, not to be confused with ruthless, pursuit of one’s happiness. This makes the classic movie, the forerunner to another upcoming remake by two talented and luminous stars, a perfect ending for this year’s writing-themed classic film festival.